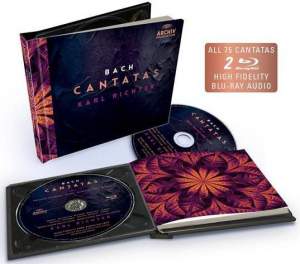 Show 65 remaining works on this recording

Hide 65 works on this recording

In the 1950s, when Karl Richter made his earliest recordings of sacred vocal music by Bach, his disciplined and vital approach was hailed as revelatory. Richter’s firm grounding in Lutheran theology, his intuitive feeling for the nobility of Bach’s music and his pronounced gift for eloquent phrasing all contribute to a performing style which possesses not only a warmth of sentiment and a distinctive expressive fervour but also a supple inner strength, strikingly evident in the chorale-based choruses which, in so many instances, provide the focal point of Bach’s cantatas.

Richter’s Bach recordings spanned a period of almost 30 years. At first he played continuo under Ramin, then he directed his own performances before becoming, in 1958, a major artist for the Archiv label. But it was in the early 1970s that Archiv provided him with an opportunity of recording a cantata for every Sunday and Feast Day of the Lutheran church year. The project, embracing 64 cantatas, most of them newly recorded for the Archiv cycle, was one which gave Richter particular pride and deep satisfaction; and it is here, above all, at the very heart of Bach’s creative world, that we can admire Richter’s skill in blending component parts to form a unifying whole. The most important of these were his meticulously trained choir of women’s and men’s voices, his handpicked group of instrumental obbligato players, and an outstanding line-up of soloists to whom he expressed the strongest artistic commitment and for whom he demonstrated undying loyalty.