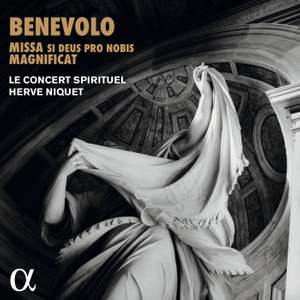 Niquet appropriately creates a liturgical framework, weaving plainchant, motets and instrumental items around the main work; these also serve to contrast with and complement the sometimes gluttonously... — BBC Music Magazine, October 2018, 5 out of 5 stars/4 out of 5 stars More…

Hervé Niquet possesses two constant character traits: he is an indefatigable excavator of forgotten music, and he loves polyphony and ‘large forms’. A few years ago, he caused a sensation by exhuming the monumental music of Striggio. To mark the thirtieth anniversary of his ensemble, Le Concert Spirituel, he now tackles a new peak of polyphony: a mass by Orazio Benevolo (1605–72) performed by eight choirs of four singers, accompanied by fifteen continuo players. In concert, the choirs are spread out around the nave, with the audience in the middle. Benevolo was born to a Burgundian confectioner father who had emigrated to Rome. Educated at the choir school of San Luigi dei Francesi, he became one of the greatest geniuses of polychorality, a prolific composer who represented the splendours of French art in Rome. He ended his career as maestro di cappella at the Vatican. This music has been resurrected thanks to the work of the great musicologist Jean Lionnet, who spent many years copying out by hand the music of numerous Italian composers in the Vatican archives, from which it was impossible to borrow documents. As a result of his labours the Missa Si Deus pro nobis has now been recorded, accompanied by vocal and instrumental pieces by Monteverdi, Frescobaldi and Palestrina.

Niquet appropriately creates a liturgical framework, weaving plainchant, motets and instrumental items around the main work; these also serve to contrast with and complement the sometimes gluttonously rich textures of the Mass itself…[He] does a heroic job of holding it all together. The end of the Credo detonates gloriously resonant brass depth charges…Altogether, a wonderful disc of music fully deserving discovery. Bravo Benevolo – and his latter-day champions!

The Benevolo Mass might be seen as musically static, but the acoustical blend of the divided choruses gives it a timeless sound, slow moving and absorbing. The voices and instruments of Le Concert Spirituel have the right sort of texture to bring this music alive, transporting the listener into a solemn and pensive state. The resonance of the venue also helps considerably give it depth and power. This is not everyday music, but rather one to elicit contemplation and majesty.

[Niquet makes] a powerful case for works whose sheer scope is both their appeal and a significant barrier to their rediscovery…What’s startling here is the range and intricacy of the polyphonic effects woven through Benevolo’s Mass. Monumentality is never reduced to one-note grandiosity… As compelling sonically as it is historically, this is a recording whose interest extends well beyond the specialist – a glorious re-creation not just of a lost composer but of an era

The Franco-Italian composer Orazio Benevolo (a contemporary of Carissimi, Cavalli and Cesti) was entirely new to me, but these pungent, high-energy performances by Niquet and his French period band suggest a musical imagination which yields little to Monteverdi: the Cantate Domino begins along similar lines to Pitoni’s better-known setting but quickly spirals into something infinitely more radical, and the breakneck climax of the Mass’s Gloria left me gasping for breath.