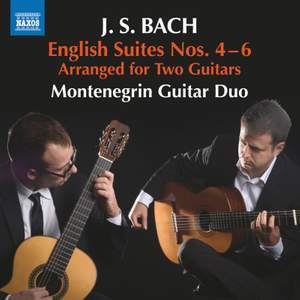 The versatility of the suite form proved well suited to Johann Sebastian Bach in his instrumental works, and the English Suites are no exception. These are distinct from Bach’s other suites with their quasi-improvisatory opening Preludes, and further movements encompassing a wide range of moods and styles from lively dances to the pensive intensity of the slow Sarabandes. The Montenegrin Guitar Duo’s fresh and historically informed performances of these works have been acclaimed as “simply ravishing” (American Record Guide). The Montenegrin Guitar Duo is frequently invited to venues such as the Philharmonia Hall in Saint Petersburg, Manuel de Falla Hall in Madrid, and the Concertgebouw, Amsterdam. International festivals regularly engage the duo to give recitals, deliver lectures and masterclasses, and adjudicate major competitions. In 2013 their debut album was released by the Montenegrin Music Centre, featuring works by Domeniconi, Piazzolla and Bogdanovic. The first of their two volumes of Bach’s English Suites was released in 2015 and received excellent reviews.