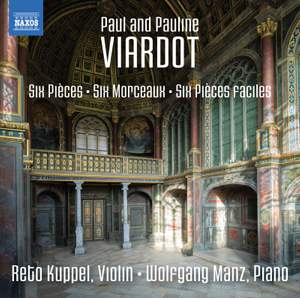 Pauline and Paul Viardot were members of the famous Garcia family, Pauline’s father the world renowned operatic tenor Manuel, and her son Paul a violin prodigy who rubbed shoulders with Europe’s elite and became a friend and colleague of Saint-Saens. Pauline’s ‘Six Morceaux’ were composed as a gift to her young son. Beyond his ‘Sonatas,’ much of Paul Viardot’s music consists of the short ‘salon’ works on this recording. They are considered “a treasure of melodies” by Reto Kuppel, and an evocation of 1920s Paris and French elegance. Violinist Reto Kuppel has performed throughout Europe and the United States and has appeared as a soloist with many German orchestras, including the Hamburg Symphony Orchestra, the Munich Symphony Orchestra, the Concertino Hamburg, the Ensemble Haar, and the Augsburg Philharmonic Orchestra. He studied with Andreas Rohn at the Hochschule fur Musik und Theater in Hamburg, and with Dorothy DeLay at The Juilliard School in New York. His solo albums have been highly acclaimed by both critics and audiences.