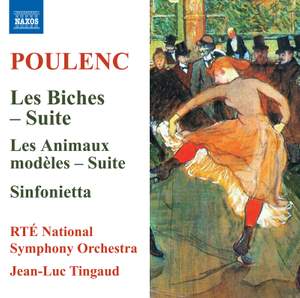 Crikey, this is good: the zingiest, most pungent performance imaginable of the suite from Poulenc's ballet Les Biches…I've never heard this music sound so joyful, so gleefully irreverent, with... — The Arts Desk, 9th June 2018 More…

Poulenc wrote two ballets, the suites from which feature on this recording. Fusing together musical styles from various periods and genres enabled him to construct the largely plot-free narrative of ‘Les Biches,’ a sequence of captivating dances that explore many themes which were considered taboo at the time. In ‘Les Animaux modeles,’ Poulenc transforms the animals of La Fontain’s fables into human characters in a patchwork score brimming with color, wit, and self-borrowings. The ‘Sinfonietta’ is playful and light-hearted. From its foundation in 1948 as the Radio Eireann Symphony Orchestra, the RTE National Symphony Orchestra has been at the forefront of symphonic music in Ireland. Today, the RTE National Symphony Orchestra plays a central role in classical music in Ireland through year-long programmes of live performances, schools and educational projects, broadcasts, recordings and new commissions.

Crikey, this is good: the zingiest, most pungent performance imaginable of the suite from Poulenc's ballet Les Biches…I've never heard this music sound so joyful, so gleefully irreverent, with Jean-Luc Tingaud’s Dublin orchestra playing their collective chaussettes off…Few discs this year have cheered me up so much as this one. It’s handsomely recorded – a sensational disc.