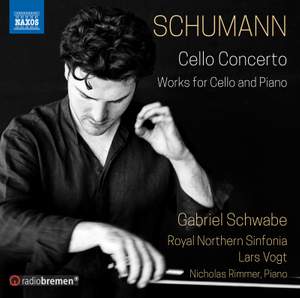 Schumann’s love of the cello, which developed when he learned the instrument as a young man, is expressed most fully in his ‘Cello Concerto in A minor.’ It is a work marked by freshness of spirit and singing lyricism and stands as a rich example of mid-19th-century Romanticism. The series of characterful small pieces that include ‘Funf Stucke im Volkston’ reveals Schumann’s joy in the cello’s unique lyrical capabilities. The ‘Drei Romanzen’ and the ‘Intermezzo’ from the ‘F-A-E Sonata’ are presented here in new arrangements for cello and piano by Gabriel Schwabe. Gabriel Schwabe has established himself among the leading cellists of his generation. He is a laureate of numerous national and international competitions, including the Grand Prix Emanuel Feuermann and the Concours Rostropovich in Paris. As a soloist he has worked with orchestras such as the Philharmonia Orchestra, the NDR Radiophilharmonie, the Berlin Radio Symphony Orchestra, the Deutsches Symphonie-Orchester Berlin, the Malmo and Norrkoping Symphony Orchestras and the Royal Northern Sinfonia. He plays a rare Italian instrument made in Brescia (c. 1600).

Schwabe majors on the lyrical character of the Concerto…The chamber dimensions of Lars Vogt’s Northern Sinfonia enable the cello to participate on a more level playing field than larger forces would allow…A useful survey in near-ideal performance, finely recorded.

The fine recording, made at Sage Gateshead, ventilates the textures further while successfully conveying the beguiling chamber-scale responses of the entire ensemble.