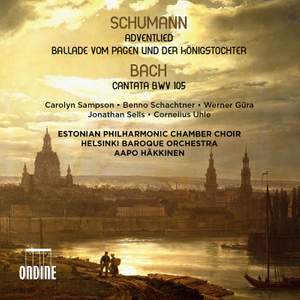 Helsinki Baroque Orchestra and the Estonian Philharmonic Chamber Choir led by Aapo Hakkinen join their forces together with an impressive vocal cast, Carolyn Sampson, Benno Schachtner, Werner Gura, Jonathan Sells and Cornelius Uhle, in this unique release of rarely heard choral works by Robert Schumann (1810-1856). This recording includes the world premiere recording of Schumann's 17-minute Adventlied, Op. 71 for soloists, chorus and orchestra, four choral ballades based on texts by Emanuel Geibel, and Schumann's version of Bach's Cantata BWV 105. Robert Schumann wrote in 1850: "Keep in mind that there are also singers, and that the highest in musical expression is achieved through the chorus and orchestra." This illustrates well the composer's desire to write large works for this medium in an attempt to create a new genre for the concert hall. Today, they still constitute the least explored area of his output. The elevated style he was aspiring to (both in the text and the music) was unheard-of outside the realm of church music. In fact, whether for the church, opera, or the concert hall, Schumann was looking for a sanctified realm, a Goethe-inspired meeting ground for art and religion.

Häkkinen clearly thinks this music needs a fresh approach. His superb liner note shows that his score, instruments and orchestral placement are as historically informed as possible. More importantly, he has also immersed himself in Schumann’s elusive mindset.