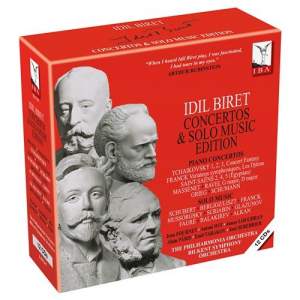 After making her first solo piano LP recording in 1959 at the age of seventeen, Idil Biret had to wait nearly three decades before recording with an orchestra in a studio. In 1988 she recorded in London the 2nd and 4th Piano Concertos of Saint-Saens with the legendary Philharmonia Orchestra conducted by James Loughran. The Philharmonia Orchestra was established after WWII and employed extensively by another legend of music, the great producer Walter Legge, to make recordings for EMI/HMV. It was led by some of the greatest conductors of the twentieth century, such as Furtwangler, Toscanini, Richard Strauss, and Karajan. Many great pianists had recorded with this orchestra. During the next twenty-five years Biret made recordings of over sixty works for piano and orchestra in studio and at concerts under the baton of eminent conductors including Jean Fournet, Emil Tabakov, and Toshi Shimada. All of these have been released on Naxos and IBA under Naxos catalogue numbers. Additionally, live recordings of other piano concertos from Biret’s concertos from 1954 onwards with eminent orchestras are available as well. All of the aforementioned are included in this enormous release.