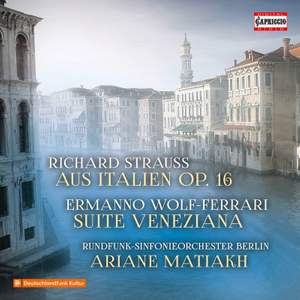 I. In Laguna. Andante tranquillo

Never have I really believed in inspiration by the beauty of nature; I was put right by the ruins of Rome. There my ideas just flew to me'. Aus Italien was the first major symphonic poem to be composed by Richard Strauss, preceding later masterpieces such as Don Juan, Tod und Verklarung, Ein Heldenleben or Eine Alpensinfonie. The Venetian Suite was written in 1935 by then almost 60-year-old Ermanno Wolf-Ferrari. It is the music of an opera composer, accustomed to illustrating events with his music, and yet in his concert works handing over many things to the imagination of the listeners, not wanting to give all the answers in advance.