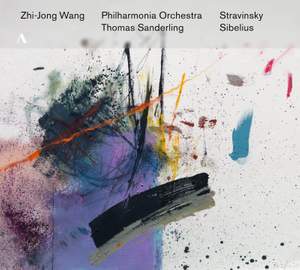 With the violin concertos by Jean Sibelius and Igor Stravinsky, Zhi-Jong Wang and the Philharmonia Orchestra, conducted by Thomas Sanderling, dedicate themselves to two works from the beginning of the 20th century. Although the two works were composed only thirty years apart from each other, they could not be any more contrasting: minor against major, dark, mystical and introverted against exciting, suspenseful and sometimes ironic. And yet, in the contrasts of these two concertos, the virtuoso and inspiring interpretation of the Chinese violinist reveals something amazingly unifying. Recorded at Abbey Road, July 2017.

It takes a versatile violinist to encompass such contrasting styles of writing with equal conviction, and this, the Chinese Menuhin-protégé Zhi-Jong Wang certainly evinces. Thomas Sanderling’s commodious tempos in the Sibelius allow full scope for her vibrant-toned lower register, though there is no lack of brilliance in the showier touches of virtuosity with which Sibelius liked to spice his solo writing.

There’s less of an icy chill about the opening to the Sibelius than other recent accounts…She paces the opening Allegro moderato steadily, with secure technical playing but without whipping up too much excitement. There is tremendous warmth in the Adagio…Wang’s Stravinsky is stronger than her Sibelius. There’s punch and pungency to her playing, and she clearly enjoys herself in the opening Toccata, while Aria I is taken at a good luck.

She creates an ideal mix of shadow and light, hush and fortissimo strength in the Sibelius, with agile and sensitive accompaniment from the Philharmonia. In contrast the sharp angles and clarity of the Stravinsky suit her iron-strong technique and virtuosity equally well, matched by crisp, nimbly rhythmic playing from the orchestra.