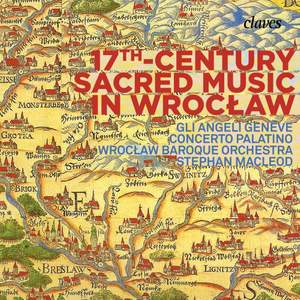 Attractive accounts of works by German and Italian composers living in 17th-century Wrocław, a well as by local Polish cantors and organists. — BBC Music Magazine, June 2018, 3 out of 5 stars More…

17th Century Wrocław (then Breslau) was one of Europe’s important musical centres. Its three main Protestant churches – St. Elisabeth, St. Mary Magdalene and St. Bernardine – collected extensive music libraries. Their repertoire was shaped both by prints imported from Italy and Germany, and by works composed by local cantors and organists employed in church ensembles. A separate collection of nearly 400 prints from 1610–55 remained in private hands. During World War II, however, they were taken away from the city and dispersed after 1945. Some items have not been found until now. The majority of the prints returned to Wrocław. Numerous manusripts were considered lost until the late 1980s, when they reappeared in the Berlin Staatsbibliothek. They found their way there from Moscow, where some items of the former Breslau library still remain.

Attractive accounts of works by German and Italian composers living in 17th-century Wrocław, a well as by local Polish cantors and organists.

This is an exciting musical voyage led by three remarkable ensembles into unknown but fascinating landscape of baroque music with pieces from the 17th century coming from archives in Wroclaw. Gli Angeli Genève, Concerto Palatino, and the Wroclaw Baroque Orchestra under Stephan MacLeod deliver lively and subtle performances.