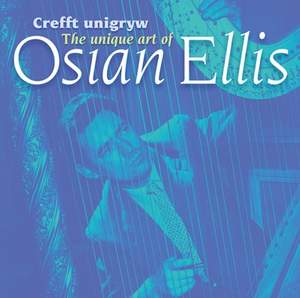 The Unique Art Of Osian Ellis

Manno: And Death Shall Have No Dominion

Osian Ellis is regarded not only as an international harpist of high acclaim but also as one of the most notable musicians of the 20th century. Born in Flintshire and raised in Denbighshire, Osian started playing the harp at a young age, as a pupil of Alwena Roberts, ‘Telynores Iâl’. At the age of seventeen he was awarded the Joseph Parry Scholarship to study at the Royal Academy of Music, London, and was eventually appointed Professor of Harp there, a post he held for over 30 years. In 1960 he was appointed as Principal Harp of the London Symphony Orchestra, and the next 30 years would see him performing extensively with the orchestra and also as a soloist and chamber harpist with the renowned Melos Ensemble. Many leading composers, including William Mathias and Alun Hoddinott, composed works especially for Osian, and he also worked closely with Benjamin Britten. Britten composed the harp parts in many of his leading works with Osian in mind to perform, and in 1969 he composed his Suite for Harp for Osian. In his own compositions, Osian draws on his Welsh musical heritage and his works include settings of Welsh folksongs for tenor and harp and settings of medieval Welsh strict metre poems as well as his Diversions for two harps.