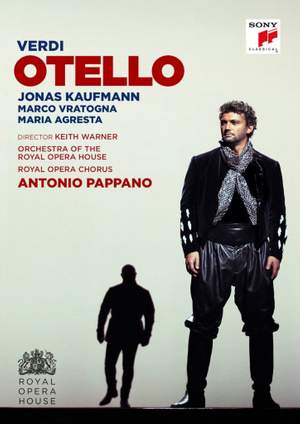 Though he is in fine voice, he does not come across as the wounded animal that the greatest Otellos – Jon Vickers, Mario del Monaco - so impressively were. Kaufmann is happiest in the more lyrical... — BBC Music Magazine, August 2018, 3 out of 5 stars More…

Recording of the Week,  Otello from the Royal Opera House, starring Jonas Kaufmann

The German tenor sings his first 'Lion of Venice' in Keith Warner's 2017 production, opposite Marco Vratogna and Maria Agresta.

‘Jonas Kaufmann Sings an ‘Otello’ for the Ages’- New York Times. On a sweltering night at London’s Royal Opera House in June 2017, Jonas Kaufmann made his debut performance as Otello - one of the most coveted and challenging roles in the tenor operatic repertoire. The Guardian commented on his performance: “Kaufmann thrills in a dark, expres-sionistic staging”. This new production by director Keith Warner presents a simultaneously modern and abstract approach to one of Verdi’s greatest operas. The DVD and Blu-Ray will also include two short bonus features: - An introduction to the opera & a short feature about the music of the opera with the conductor and tenor.

Though he is in fine voice, he does not come across as the wounded animal that the greatest Otellos – Jon Vickers, Mario del Monaco - so impressively were. Kaufmann is happiest in the more lyrical passages, which become increasingly rare as the opera proceeds…I found that Marco Vratogna as Iago, though his voice is not beautiful, was the most powerful stage-presence…and I can imagine Frédéric Antoun, here singing Cassio, becoming an Otello himself in due course.

Kaufmann’s exceptional musicality makes itself felt throughout the opera in a manner that has rarely been equalled in this history of recording…The vulnerability of this Otello lies not so much in his ethnic otherness as in his emotional ingenuousness…Agresta proves on the whole a worthy partner for Kaufmann, singing with attractively vibrant tone and admirable technical control…]Pappano] rivals Carlos Kleiber in his commanding grasp of the score’s architecture.

Kaufmann thrives under the scrutiny of the camera..He has a formidable antagonist in the French baritone Marco Vratogna, whose apparent honesty is dressed up as a dysfunctional bluntness that borders on the psychopathic...Agresta’s radiant Desdemona is no ingénue but a mature and assured First Lady...and Antonio Pappano ensures that the orchestra anticipates every nuance from Kaufmann in particular.

There can’t be much complaint about [Kaufmann's] singing’s mastery and beauty here; his eloquent phrasing and control of dynamics are exemplary whether the register is high or low...There’s a sense that he’s still feeling his way towards the part’s depths, while Vratogna’s insistent Iago and Maria Agresta’s warmly lyrically Desdemona, pointedly dressed in virginal white, are already in command.