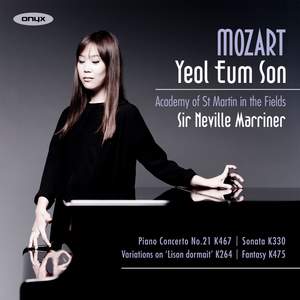 It finds [Marriner] and the ever-faithful Academy of St Martin in the Fields doing what they did best: Mozart in elegant, unpretentious style, with great attention to detail that never unbalances... — BBC Music Magazine, August 2018, 4 out of 5 stars More…

A double Second Prize winner at the Tchaikovsky International Piano Competition in 2011 (To my ears she gave the more exciting interpretation of the mandatory Tchaikovsky First Piano Concerto: a blistering reading that left me gasping.

I would have given her gold, not silver’ The Times, London) and at the 13th Van Cliburn International Piano Competition in 2009, Yeol Eum Son’s graceful interpretations, crystalline touch and versatile, thrilling performances have caught the attention of audiences worldwide.

Praised for her widely eclectic concerti repertoire, ranging from Bach and all Mozart to Shchedrin and Gershwin, her recent concerto highlights include appearances with the Orchestre Philharmonique de Radio France and Mikko Franck, Mariinsky Theatre Orchestra under Valery Gergiev, Seoul Philharmonic and a European tour with KBS Symphony Orchestra.

This recording was the last made by Sir Neville Marriner.

It finds [Marriner] and the ever-faithful Academy of St Martin in the Fields doing what they did best: Mozart in elegant, unpretentious style, with great attention to detail that never unbalances the bigger picture and longer lines. This is Mozart for both heart and mind, without distraction by mannerism of exaggeration…from this recording [Son] is well worth Marriner’s attention and ours.

The first impression is a reminder of what a stylish Mozartian the late conductor was, his Academy musicians rolling out a plush carpet for Son’s entrance…Son is clearly her own woman, however, with a broad dynamic palette and a keen awareness of style…She takes care not to grandstand, blending well with the orchestra In a closely recorded acoustic…This is an uncommonly fine Mozartian debut.

[K467] What a sparkling performance it is! Marriner bringing a lifetime of experience to produce an accompaniment of youthful energy to match that of the soloist a third of his age. he opening Allegro maestoso is exactly that, fast and majestic, its grandeur subtly drawn in what is one of Mozart’s finest creations. Her phrasing of the celebrated Andante is a model of restraint and delicacy, reminiscent of Curzon at his best. The finale breezes along, a model of harmony between soloist and orchestra. Yeol’s brilliant account of the 10th Sonata rivals Christian Blackshaw’s Wigmore account; and her polished interpretation of the Fantasy in C minor concludes a rather fine disc.

A model of clarity and fleetness.