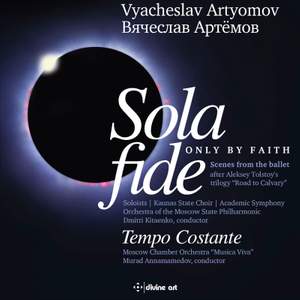 Sola Fide Suite No. 4 "The Terrible Days": I. Prologue

Vyacheslav Artyomov is considered by many to be Russia's greatest living composer. After the fall of the Soviet regime his music has travelled the world to great acclaim. It is deep, ultimately spiritual and brilliantly crafted, with influences from the Russian symphonic tradition coloured by Mahler, Scriabin, Honegger and Messiaen to name a few – but melded into a unique voice. Following the critical acclaim of his first two Divine Art albums, this program includes his Concerto for Chamber Orchestra 'Tempo Costante' and two suites from the ballet 'Sola Fide' ('Only by Faith') which is based on the novel The Road to Calvary by Aleksey Tolstoy; it shares an ethos and much music with Artyomov's celebrated Requiem hence the choral elements found in the ballet score.