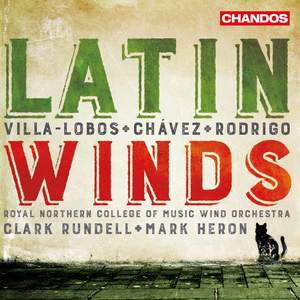 Rodrigo: Per la flor del lliri blau (For the flower of the blue lily)

From Spain to Mexico and Brazil, the RNCM Wind Orchestra under the conductors Clark Rundell and Mark Heron here celebrates the strong Latin tradition of wind bands in an exhilarating programme. The album prominently features works by one of the most iconic composers for winds, the Brazilian Villa-Lobos. Their liveliness, freely changing modalities, ease of flow, and likeable sonorities are a striking compositional signature, the unusual Concerto Grosso exploring a unique sound world with concertante discussion among the four wind soloists and the wind band. Also heard are the tender wind Adagio by Rodrigo and his arrangement for band of his first major symphonic work, Per la flor del lliri blau, which in dreamily evoking the age of mediaeval tales inspired his Concierto de Aranjuez. We are brought to Mexico with a stunning work by one of the country’s most popular composers, Carlos Chávez, celebrating a range of popular national genres: the march, waltz, and song.

The music itself is uneven…The performances, though, as consistently good, and the playing is fresh and exciting throughout.