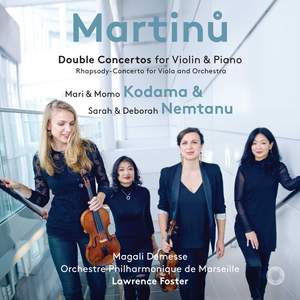 Martinů: Rhapsody-Concerto for Viola and Orchestra

This release reunites the Kodama sisters in the studio following their scintillating recording of Tchaikovsky ballet suites for PENTATONE. In a review of a public performance of the Martinů Concerto for Two Pianos and Orchestra, the Ziebline journal wrote “Mari and Momoyo Kodama are extraordinary ... The fingers of the Japanese musicians were flying with with diabolic ease and finesse: a stunning finale.”

Bohuslav Martinů’s distinctive musical voice, which infuses the great Czech tradition with modern idioms, is showcased in this captivating survey of his concertante works, performed by the Orchestre Philharmonique de Marseille conducted by Lawrence Foster.

The Concerto for Two Pianos and Orchestra is a lively and rhythmic tour de force. Breezily energetic and relentless, it is full of jazzy inflections and high speed fireworks, pausing only in the tranquillity of the slow movement for moments of serene calm.

By contrast, the Concerto for Two Violins and Orchestra is a warm, lyrical work in the Romantic tradition. With its intricate and interweaving solo lines, expansive melodies and dance-like syncopations it’s an engaging work of considerable charm which deserves a wider audience. The Rhapsody-Concerto for Viola and Orchestra is a dreamily nostalgic work whose simple melodies, radiant lyricism and soaring viola line make it one of the 20th century’s most performed viola concertos.

The biggest challenge here is the Concerto for Two Pianos…the Kodama sisters’ approach with Lawrence Foster and the very fine Marseille Philharmonic Orchestra (who knew?) is less mellow, more hard-hitting [than Bělohlávek’s 2009 Proms performance]…but also alive to the dizzying outer movements…The disc as a whole is another unmissable addition to the Martinů discography.

Martinu produced music that rarely sounds specifically Czech, yet there are touches of his native folk idiom in the highly virtuosic concerto for two pianos, brilliantly played by the Kodama sisters...A revelatory selection of some of Martinu’s most accessible works.

Sisters Deborah and Sarah Nemtanu perform Martinů’s double concerto in stunning recorded sound. Many of Martinů’s themes have their roots in folk dance, and there is an infectious zest to these performances. The second movement explores more mysterious areas, but encompasses real joy towards the end. The beautiful Rhapsody-Concerto comes against strong competition in the form of Suk and Rysanov. Here, Demesse’s viola sings its cantabile tenderly in this autumnal piece; the orchestral strings are beautifully recorded. ...another pair of sisters performs the wartime two-piano concerto, taking us to another world. This is a superb performance, the pianists’ articulation in the toccata-like first movement a joy, the central panel a fascinating tapestry. The finale is multifaceted, enigmatic and even wispy; its essence is beautifully conveyed here.