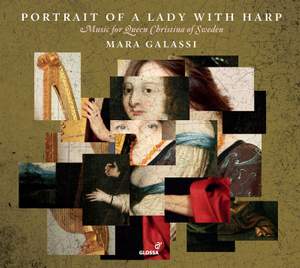 Portrait of a Lady with Harp

Music for Queen Christina of Sweden

Among the highlights are character pieces by Christina’s ‘Prince of Music’, Bernardo Pasquini…Throughout, Galassi combines precision and flair with astute musicological insights, and the regal... — BBC Music Magazine, June 2018, 4 out of 5 stars More…

Pasquini, B: Toccata per Milone

Sinfonia a violino solo (Arr. for Double Harp): I. Moderato

With a pattern of recording solo albums which has been positively frugal over the last 20 years, Mara Galassi marks her return on Glossa with a new and striking programme, entitled Portrait of a Lady with Harp. The ambiance into which the noted modernday harpist from Milan plunges the listener is that of the court of Queen Christina of Sweden who, on renouncing her throne, converting to Catholicism and moving to Rome in the mid 1650s embarked upon a spectacular cultural life, becoming a patron for writers, scientists and especially musicians. Among those composers active in Rome at the time were Alessandro Stradella, Bernardo Pasquini, Arcangelo Corelli and Alessandro Scarlatti, all of whom benefitted from Christina’s constant hunger for music of high quality, whether official employees at her court or not.

No Mara Galassi record release is going to be found lacking in an element of mystery: is the portrait of a lady with a harp appearing in the booklet that of the self-exiled queen herself? In the accompanying essay, Arnaldo Morelli investigates the history of this painting in search of answers, and describes Christina’s colourful Italian musical life.

The hectic, turbulent musical climate of mid-Seicento Rome is grasped and expressed by Mara Galassi, filtering the talents of Christina’s protégés through her chosen instrument which, for this new recording, is based on Girolamo Acciari’s 1632 “Arpa Barberini”, a triple harp of great range and subtlety.

Among the highlights are character pieces by Christina’s ‘Prince of Music’, Bernardo Pasquini…Throughout, Galassi combines precision and flair with astute musicological insights, and the regal harp is faithfully captured by Glossa’s engineers.