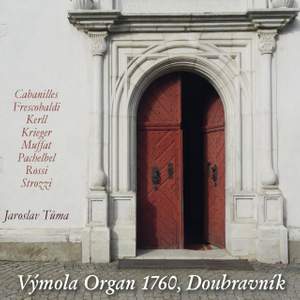 Jan Vymola built his organ in the Church of the Exaltation of the Holy Cross in Doubravnik in 1760. During the years 2009-2013 it underwent a period of restoration. As can be seen in the accompanying photographs, Jan Vymola's instrument is not constructed on a vast scale, but in keeping within the space it ocupies in the church.

Mechanically is has a slider soundboard, and lacks couplers for its two manuals and pedal. It is tuned to "A" equals 423Hz (approximately), with Fifth-comma Meantone temperament. (This detail can be found in Jaroslav Tuma's interesting background notes,)

These pieces are surprisingly modern in sound and make great use of the qualities of Jan Vymola's instrument. They are beautifully played on Czech label Arta by their keyboard wizard Jaroslav Tuma, and recorded in the Highest of FI.