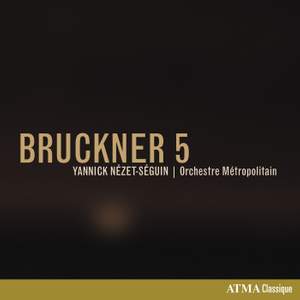 The Orchestre Métropolitain de Montréal directed by Yannick Nézet-Séguin comes to a conclusion of a 10 year project to record the complete symphonies of Anton Bruckner. The Fifth Symphonies was recorded in 2017 and is being released for the first time individually, in digital format only. Bruckner’s symphonies are often called ‘cathedrals of sound’ and the spiritually profound fifth symphony fully deserves this label. As with the seventh, eighth and ninth symphonies, Bruckner uses an even larger orchestra for this work. Composed between 1875 and 1878, the fifth symphony is an imposing journey displaying Bruckner’s stunning technical skill. “When it comes to counterpoint, this is the best I’ve done,” he declared.