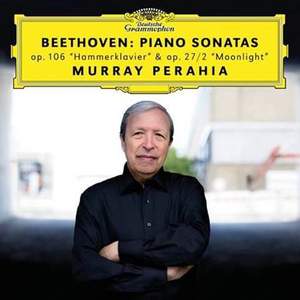 Living legend of the piano Murray Perahia records two benchmark sonatas by Beethoven for the first time in his career.

Long renowned for his performances of this composer comes Perahia’s brand new recording that pairs together two of the most radically ground-breaking of Beethoven’s 32 piano sonatas.

Sure to be a crown jewel of the Beethoven discography, Perahia supports the release with major recital tours in Asia, USA and Europe.

• Murray Perahia stands in the tradition of the great keyboard virtuosi as an artist armed with consummate technical skills, boundless imagination and near-mystical eloquence.

Murray Perahia explored the Hammerklavier Sonata first when he was in his mid-twenties. While the work’s enormous technical and physical challenges fell within his grasp, its profound musical demands eluded him. He quietly dropped the “Hammerklavier” from his repertoire, recognising that he would need time to fathom its cosmic depths. Over four decades passed before he felt ready to programme the piece in recital.

After years of studying the original manuscripts, working sketches and editions published during the composer’s lifetime, and having edited the new Henle Urtext edition of The Complete Beethoven Piano Sonatas, Perahia now presents two of Beethoven’s most famous sonatas as a revelation.

“The challenge of this music is still alive because one can get deeper and deeper into the piece’s mysteries. That’s endless – both musicologically and emotionally. Everything in it is connected. There isn’t a random note, yet it feels improvisatory. So it’s a mystery that will intrigue and occupy musicians forever.” Murray Perahia.