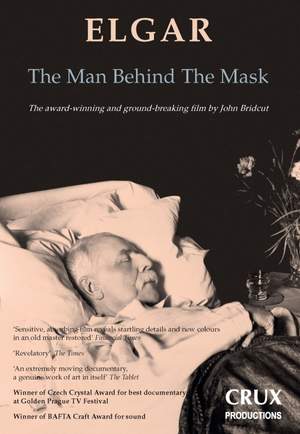 Elgar: The Man Behind The Mask

A film by John Bridcut

Bridcut’s primary gift is to bring the music of these composers alive, weaving archive footage with specially filmed performance and deft contributions from a handful of musicians well able to... — The Observer, 1st July 2018 More…

With his noble bearing, stiff upper lip and imperial moustache, the composer Sir Edward Elgar is often seen as the epitome of Edwardian England. But this image was deliberately contrived, and far from reality. Based on the enigmatic clues he left in his music and in his private correspondence, John Bridcut's film looks behind the famous moustache to disclose the apparently self-confident Elgar as a brilliant but neurotic musician, with a chip on his shoulder about his lowly origins and his Catholic religion, who despised the Establishment, yet longed to belong to it. Elgar's intense relationships with several women apart from his wife belong to his restless, obsessive nature, and fresh evidence of the nature of these relationships is revealed in the film.This surprising portrait of a musical genius, originally shown on BBC Television, explores the secret conflicts in Elgar's heart which produced some of Britain's greatest music. Among the specially-shot performances are the dark, suicidal music of Judas in The Apostles (rarely-heard and never filmed before, yet this is Elgar at his most operatic), the turmoil of The Music Makers, and the bleak, almost atonal character of some of his unaccompanied partsongs.The musicians taking part include the BBC Symphony Orchestra (conductor: Edward Gardner) with James Creswell (bass), Janice Watson (soprano), Michael Laird (shofar) and Crouch End Festival Chorus; Schola Cantorum of Oxford (conductor: James Burton); Mark Wilde (tenor) and David Owen Norris (piano).

Bridcut’s primary gift is to bring the music of these composers alive, weaving archive footage with specially filmed performance and deft contributions from a handful of musicians well able to knock down all the myths and prejudices. These commentators are passionate as well as scholarly...These invaluable films make you rethink the music. They are, too, engrossing to watch.