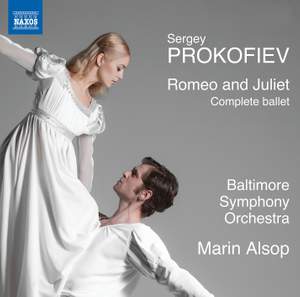 Act I: No. 9, At the Capulets' (Preparations for the Ball)

Act I: No. 17, Tybalt Recognizes Romeo

Act III: No. 49, Dance of the Girls with Lilies

Based on Shakespeare’s most famous romantic play, Prokofiev’s realisation of Romeo and Juliet as a full-length narrative ballet was audacious in its day. It was written during a period of artistic turmoil under a Soviet regime in which arguments raged over such fundamental aspects as the choice between a happy or a tragic ending. Famous movements such as the Dance of the Knights have helped maintain Romeo and Juliet as Prokofiev’s bestloved stage work. Marin Alsop’s acclaimed cycle of Prokofiev’s Symphonies has been described as ‘an outstanding achievement’ by BBC Music Magazine.

She underlines the affinities of Prokofiev’s masterly scoring and melodic memorability with those of her mentor, Leonard Bernstein. It’s an account of high drama — as the thrilling Quarrel and Battle sequences demonstrate — and rapturous lyrical qualities.

On this superbly recorded new release, Marin conducts the excellent Baltimore Symphony Orchestra and charts the doomed love of Romeo and Juliet as revealed in Prokofiev’s sublime, passionate and instantly appealing music.