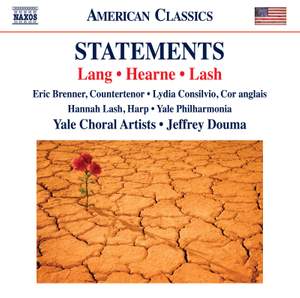 Lang, D: statement to the court

Yale Choral Artists has rapidly established itself as one of the most innovative professional choirs in the world, and its recordings of works by three Yale composers showcase the breadth of contemporary American choral music. They include the powerful statement to the court by David Lang, whose the little match girl passion won the Pulitzer Prize for Music. Ted Hearne’s Consent uses four disparate texts in a complex personal exploration of the role of language in his life, while Hannah Lash’s Requiem is an expression of sorrow framed through a retranslation of the Latin text.