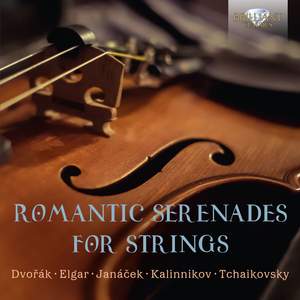 A generous and unique compilation of Romantic music for string orchestra, featuring both delightful rarities and renowned masterpieces of the genre.

The term serenade originally signified a musical greeting, usually performed out of doors in the evening, to a beloved or a person of importance. Thus the qualities of affection and lightheartedness were established early in the history of the serenade, and they continued to be respected and exploited throughout the Romantic era.

The outdoor serenade was naturally better suited to wind-instruments, with their greater volume and carrying power, but astring band was more appropriate for tender and amorous expressions. Alone of the Romantics, Dvořák composed an example of each, and his Serenade for Strings is notably more relaxed and longer-limbed. However, the high watermark for the string serenade in the late 19th century was set by Tchaikovsky, with a masterpiece that recalls the example of his beloved Mozart.

With his neoclassical Holberg Suite, Grieg looked back further still, to the world of Baroque dances. Some of the most rewarding but least-known music in the box is also Scandinavian in origin: the two symphonically scaled Novelettes of Niels Gade. Yet more heartfelt is the early Serenade by Josef Suk, and this work from 1892 set the tone for the more impassioned works for string orchestra which would be written, still in a broadly Romantic vein, during the first half of the last century. They include the profound access to an earlier age evoked by Ralph Vaughan Williams in his Fantasia on a Theme of Thomas Tallis, the sombre Trauermusik which Paul Hindemith composed overnight to mark the passing of King George V in 1936, and the darkly coloured, concerto-grosso-style Divertimento of Bartók from three years later. With their greater melodic generosity and cinematic sweep, the works by Ghedini and Rota bring the genre of serenade full circle, back to a world of straightforwardly appealing expression.

This 5-CD set contains one of the most extensive selections of Serenades for String Orchestra, a warm bath of lush, vibrant and soothing music, utterly romantic, atmospheric and beguiling, like the buzzing of a summer afternoon.

The booklet contains descriptions of each work in English.