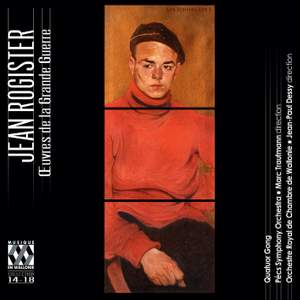 Rogister: Viola Concerto in A Major (version for viola and orchestra)

This CD brings together works composed by Jean Rogister (1879-1964) during World War I: like most of his co-religionists, banned by edict of the occupying forces from appearing in public or even from teaching, Rogister did “profit” in one way from the Great War in that he developed a new embryonic vocation. Whole-heartedly adopting the post-Franckian vein, and remaining faithful to traditional tonality, he forged his own musical idiom, partly due to his melodic verve. A century after the end of the war, now that a “new simplicity” is gaining ground, his meditative and melancholy works, shot through here and there by tensions of various kinds, should have no difficulty in appealing to a new listening public.