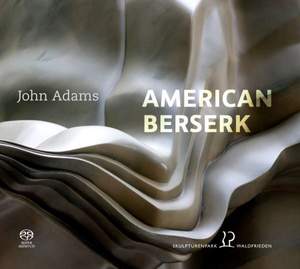 A varied disc of solo instrumental and chamber works, it is a vibrant listen with the usual tropes of minimalist music presented in an easily digestible way. — BBC Music Magazine, June 2018, 4 out of 5 stars

“My music is very American in the sense that is very pulse driven. I think the Central European tradition is really one of lyricism and expressiveness. Of course, there is a lot of elasticity in phrasing and tempo in the music of Mahler, for example. But to sort of get into the groove, what we say in the USA ‘in the pocket,’ and stay there and at the same time constantly shift the accent of the pulse is something.” (John Adams)

With American Berserk the Cragg Foundation has released a CD with works of piano and chamber music by the American composer John Adams. Right from the start Adams strived to “forge a language out of the compost of American life.” At the same time Adams succeeded in incorporating forms and gestures belonging to the Central European tradition into his music and then proceeded to add typically American elements. For Adams, music is above all an emotional art and so he has a great command of the vocabulary of late Romanticism and combined with the rhythms and sensibilities of American life he has created a music of great depth and brilliance. For the first time the Cragg Foundation Edtion uses the latest recording technology from ECHO Klassik winner Ingo Schmidt-Lucas, 3D Binaural Stereo (Artificial Head), on SACD: This SACD contains not only a Stereo and a Surround version but also a 3D Binaural Stereo recording realized in a very purist manner with only two microphones and without any filters or effects. When listening to such a 3D record ing with headphones, this unique process places you almost directly on the scene, as though you were experiencing the recording as a live event. It creates a natural sound and spatial impression that approximates natural human hearing.

A varied disc of solo instrumental and chamber works, it is a vibrant listen with the usual tropes of minimalist music presented in an easily digestible way.