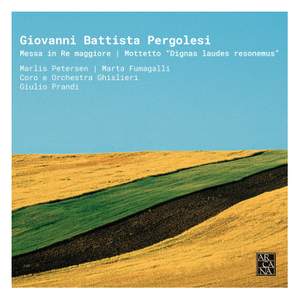 While his Stabat Mater and Magnificat are relatively well-known, there are other sacred works which, if this CD is anything to go by, are equally fine and deserve hearing. Backed by the musicological... — Classical Music, July 2018, 5 out of 5 stars More…

New light on Pergolesi! This CD sheds light on a lesser-known aspect of the great Italian composer, offering two masterpieces in their first modern edition and first recording: the Mass in D major and the mottettone Dignas Laudes. Both editions are the outcome of recent musicological research carried out by the Centro Studi Pergolesi in Milan, and show a facet of Pergolesi – his energetic and solemn character – that complements and amplifies the dramatic and introspective moods of his most renowned sacred works.

This Arcana release inaugurates a collaboration with the Ghislieri Choir & Consort and celebrates the fifteenth anniversary of the ensemble, which specialises in eighteenth-century sacred repertory and has already recorded works by Galuppi, Jommelli, Perez (Il Mattutino de’ Morti) and Handel (Handel in Rome 1707) for Sony-DHM.

The soloists on this recording, conducted by Giulio Prandi, are the soprano Marlis Petersen, one of the leading sopranos on the international scene, and a quintet of young Italian singers who already perform in the most important and prestigious European venues.

While his Stabat Mater and Magnificat are relatively well-known, there are other sacred works which, if this CD is anything to go by, are equally fine and deserve hearing. Backed by the musicological work of Milan’s Centro Studi Pergolesi, Giulio Prandi and his excellent forces offer a stylish reading of this unfamiliar music, with crisp string playing, a lively choral sound and excellent soloists. They are equally effective in the Marian motet Dignes laudes resonemus, which structurally resembles the more familiar Stabat Mater. Scored for double five-voice chorus and a double string orchestra, oboes and a pair of trumpets, it is an impressive work. Worth investigating.