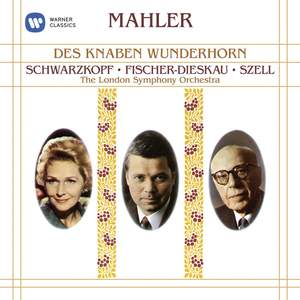 Electrifying, inspired performances. Schwarzkopf and Fischer-Dieskau show complete mastery of vocal and orchestral colour in this crystal-clear, still-revelatory recording with Szell and the... — BBC Music Magazine, August 2018, 5 out of 5 stars More…

The folk songs and poems of the collection Des Knaben Wunderhorn (The Youth’s Magic Horn), first published in the early 19th century, played a crucial role in Mahler’s development as a composer. Encompassing the vast range of expression in these 12 settings – from hauntingly dark tragedy to exuberant comedy – are the two defining lieder singers of the second half of the 20th century, Elisabeth Schwarzkopf and Dietrich Fischer-Dieskau. Like Mahler himself, the Budapest-born, Vienna-trained conductor George Szell exemplified the rich musical tradition of Central Europe.

Electrifying, inspired performances. Schwarzkopf and Fischer-Dieskau show complete mastery of vocal and orchestral colour in this crystal-clear, still-revelatory recording with Szell and the LSO.