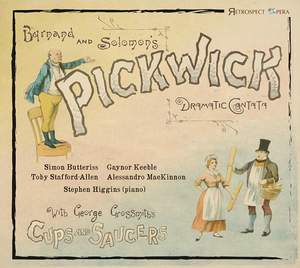 The one-act operetta Pickwick, the first successful musical adaptation of one of Charles Dickens's stories, has a delightful, fun-filled (and pun-filled) libretto by Sir Francis Burnand, the versatile writer who had teamed up with Sullivan before the latter established his more enduring partnership with W. S. Gilbert. The most famous incident in Pickwick Papers, the hilarious 'misunderstanding' between Mr Pickwick and Mrs Bardell, is brought to life in a series of sparkling songs and duets. The companion work, Cups and Saucers of 1876, was written, composed and performed by George Grossmith (1847-1912), best known for his origination of many of the Gilbert and Sullivan patter roles, but a talented composer and writer in his own right. It is a delicious little satire on the British obsession with Oriental china and may have helped inspire The Mikado.