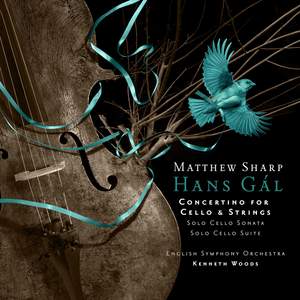 It’s a much more expansive composition than the title might suggest, with three substantial movements, that demonstrate impeccable craftsmanship and a tightly-knit organisation of thematic material…Matthew... — BBC Music Magazine, May 2018, More…

Bringing to light another of Hans Gál’s gorgeously melodic and finely crafted scores, AVIE presents the world premiere recording of the Austrian émigré’s Concertino for Cello and String Orchestra with Matthew Sharp supported by Gál aficionado Kenneth Woods conducting the English Symphony Orchestra. Gál’s compositional output was vast, varied and consistent, from his early success in 1920’s Germany, through internment during World War II, to his days in Edinburgh where he settled, became a respected academic and lived out his long life. His vivacious Cello Concertino was written in 1965, when he was 75 years old. The two spirited solo cello works were among his last, written at the age of 92.

It’s a much more expansive composition than the title might suggest, with three substantial movements, that demonstrate impeccable craftsmanship and a tightly-knit organisation of thematic material…Matthew Sharp is an impassioned advocate, and the English Symphony Orchestra strings under Kenneth Woods, supported by a warmly ambient recording, give committed support.