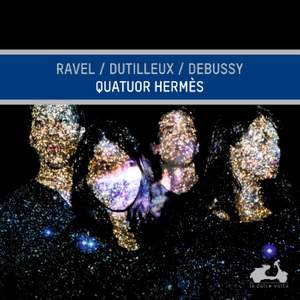 There is no need by now to introduce the Quatuor Hermès, which has become the most brilliant of the young generation of French quartets thanks to its solid track record of faultless yet never flashy performances.

After a Schumann disc acclaimed by press and public alike, the four musicians offer us here a programme they have been contemplating – and playing – for a long time now. But recording the quartets of Ravel, Debussy and Dutilleux is not something they wanted to undertake lightly after a brief flirtation . . .

‘This recording just happens to mark our tenth anniversary! But nothing is merely the result of chance: it is also the fruit of time, of all those years we have spent together acquiring a sort of wisdom, that finally persuaded us now was the moment, like a love that flowers slowly.’

The bond between the Quatuor Hermès and these masterly works has led to a recording of exceptional maturity, whose emotional power, poetry and almost incredible fusion grip you right from the first bars of the Ravel and never relax their hold until the final chord of the Debussy Quartet.

The Hermès’s ability to take you by the hand at once and never let go derives from a subtle alchemy in which fluidity in the choice of timbres, colours and moods succeeds in retelling the works’ stories in a fresh and compelling way.

A sort of natural elegance, a balance between spontaneity and profound respect for the great masters, indeed for music itself.

The playing by Quatuor Hermès intelligently illuminates the contrast of Ravel’s suave piquancy with Debussy’s riper, more rounded sounds, while Dutilleux’s sublimely suggestive Ainsi la nuit — recorded, like the rest of the disc, in the dead of night — is both evocatively coloured and precisely imagined.