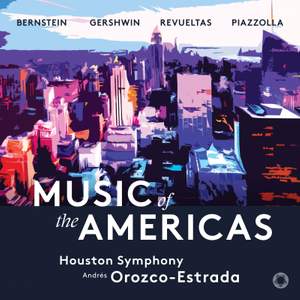 Music of the Americas

Having demonstrated their musical excellence with three well-received recordings on PENTATONE of orchestral works of Antonin Dvorák, Houston Symphony and Andrés Orozco-Estrada now present an album that comes closer to their cultural roots than ever before. Dance rhythms, jazzy harmonies, bright colors, city sounds; everything one associates with The Americas can be heard on this recording. With George Gershwin’s 1928 piece An American in Paris, Silvestre Revueltas’s Sensemayá (1938), Leonard Bernstein’s Symphonic Dances from West Side Story (1961) and Ástor Piazzolla’s Tangazo (1970), it brings together composers from across the twentieth century, all connected by their belonging to the Americas. Moreover, all of these composers reconfigured the barriers between classical and popular music, combining them to produce a sound that illustrates their home region. In choosing these particular works, Houston Symphony and Andrés Orozco-Estrada have aimed not to cover the entire continent but rather to provide ‘impressions’ of America and to ‘illuminate’ as many colors in the music as possible.