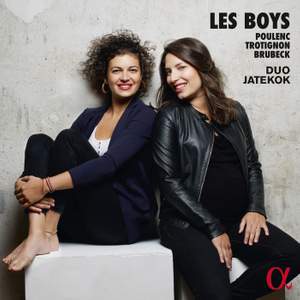 'Les girls' have tremendous fun playing up the kinship between Poulenc and Brubeck, and the whole album breathes lightly-worn chic and joie de vivre. Watch out for the final moto perpetuo of... — Katherine Cooper, Presto Classical, February 2018 More…

The piano duo formed by Arthur Gold (1917–90) enjoyed immense fame in the post-war years. Poulenc wrote a piece for them, as did Darius Milhaud, Samuel Barber, Luciano Berio and John Cage. They recorded with Leonard Bernstein. Nicknamed " The Boys", they played all over the world and were praised for their ‘seamless perfection and an inimitable " joie de vivre" (New York Times). The Boys were also famed for their bestselling books and television programmes on cooking, their other passion! Duo Jatekok (játékok =" games" in Hungarian) was formed in 2007. Like The Boys and unlike most current piano duos, Adélaïde Panaget and Naïri Badal are not siblings, but childhood friends. "They have everything going for them: dynamic rigour and expressive energy, exuberant keyboard skills and multilingual touch, and more than anything else, a sort of jubilatory osmosis" , wrote Le Monde. For this first recording on Alpha, they have decided to pay tribute to" The Boys" with a programme of works written for them, Poulenc’s Sonata for two pianos and Élégie and a composition by a legend of jazz, the American pianist Dave Brubeck, Points of Jazz. Duo Jatekok also wanted to include music by one of their contemporaries: Baptiste Trotignon’s Trois Pièces (including one dedicated to Poulenc!) complete the programme.

'Les girls' have tremendous fun playing up the kinship between Poulenc and Brubeck, and the whole album breathes lightly-worn chic and joie de vivre. Watch out for the final moto perpetuo of Baptiste Trotignon's Three Pieces, which sounds like the opening of Beethoven's Waldstein Sonata letting its hair down.

The impressive Duo Jatekok, named after Kurtag’s “Games” series of piano pieces, pay homage to a distinguished American piano duo of yesteryear, Arthur Gold and Robert Fizdale — the boys of the title