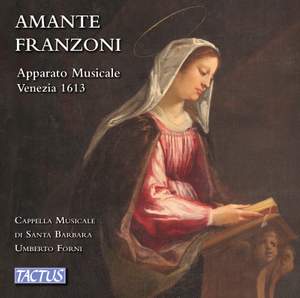 With this recording the vocal and instrumental Ensemble of the Cappella Musicale di Santa Barbara in Mantova directed by Umberto Forni continues the rediscovery of the musical heritage preserved in the Basilica archive. This time is the turn of the Apparato Musicale by Amante Franzoni, friar of the convent of San Barnaba in Mantova, where he performed musical activities requested by the Gonzaga court. Franzoni became an Academic of the Olimpico in Vicenza and, later, Chapel Master of the Duomo of Forlì. In 1612 he returned to his hometown and took up the same position in Santa Barbara hired by Duke Francesco Gonzaga who died two months later. At that point Franzoni dedicates his Apparato Musicale to Ferdinando Gonzaga (taking the power from Francesco), composed for the feast of Santa Barbara whose cult was of primary importance in the devotion of the Gonzaga court.