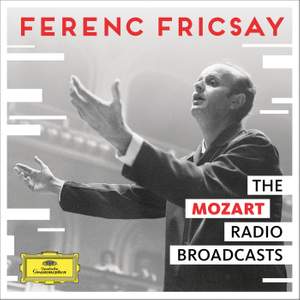 Radio broadcasts (1951-1954) uncovered in the archives of Deutschlandfunk Kultur – newly remastered and made available for the first time since the 50s – of the RIAS Symphony Orchestra Berlin, the first orchestra to be founded in post-war Berlin.

Fricsay’s career as a recording artist lasted barely 12 years, yet connoisseurs consider him a legend whose conducting style paved the way for many facets of what we consider informed conducting today.

1 A short text by Fricsay himself, providing insight into his connection to Mozart and his music

2 A new note from Wolfgang Stähr “Difficult But Wonderful Years: Fricsay In Berlin” about the founding of the RIAS Symphony Orchestra and Fricsay’s special relationship with them

Fricsay considered Mozart to be ”the greatest musical thinker ever to have lived”, and used his radio broadcasts to lay the foundations for a better understanding of his music.

Ferenc Fricsay was a pivotal figure in the rebuilding of German musical life after the war, primarily as conductor of the Berlin RIAS Symphony Orchestra. Founded during Berlin’s disastrous winter of 1946/47, the RIAS Symphony Orchestra was to give its first public concert in December 1948 for an audience still traumatised by war but who were as equally enthusiastic for music. On the podium was the young Hungarian conductor Ferenc Fricsay who immediately set about transforming the orchestra to a new level of artist excellence; that this most fastidious of musicians was able to do this was due above all to his inspired yet uncompromising rehearsals.

Even though his career as a recording artist lasted barely 12 years, almost every connoisseur of classical music would consider Fricsay a legend. His conducting style paved the way for many facets of what we consider informed conducting today, especially in Mozart; and he used his radio broadcasts to “lay the foundations for a better understanding of the greatest musical thinker ever to have lived.“