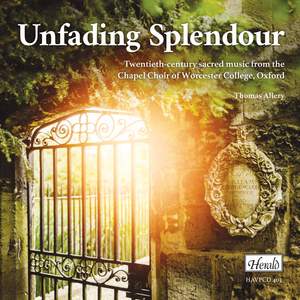 Bairstow: The King Of Love My Shepherd Is

Stewart, H C: Love Unto Thine Own Who Camest

Whitlock, P: Jesu, grant me this I pray

Ireland: Ex ore innocentium (It is a Thing Most Wonderful)

Milford: Midwinter (from A Prophet In The Land)

Milford: God Be In My Head

Worcester College Chapel maintains two separate chapel choirs, of boys' and mixed voices. The mixed choir is made up of undergraduate and graduate members of the University, and sings twice per week in the College Chapel.

In addition to its commitments in the chapel each week during the university term, the mixed choir enjoys an increasingly busy schedule of concerts, recordings, and tours. Recent highlights have included performances at St. Martin in the Fields, St John's Smith Square, and at the Queen's Chapel of the Savoy and broadcasts on live radio on the BBC Daily Service and on Sunday Worship.

The mixed choir enjoys performing a wide range of repertoire, including the promotion of lesser known repertoire. In recent years it has been known for its dedication to contemporary music, and to its performances and recordings of music by living composers and student composers. The choir holds an annual carol composition competition to encourage works from young composers.

The mixed choir has a number of CD recordings to its name, including discs of Christmas contemporary Carols, a CD of music by composers associated with the College including a new commission.

The choir is directed by the Director of Chapel Music, Thomas Allery, and accompanied by the undergraduate organ scholars who are reading for degrees in music.