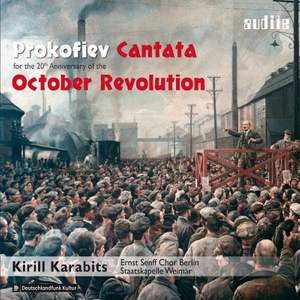 Art at the time of the ‘Great Terror’: Prokofiev’s Cantata for the 20th Anniversary of the October Revolution The twentieth anniversary of the October Revolution made the year 1937 a high point of Soviet culture. At the same time, the ‘Great Terror’ under Stalin reached its gruesome peak. Prokofiev, who settled permanently in Moscow in 1936, knew which country he had entered. The first position amongst Soviet composers seemed to have been vacated when Shostakovich had become a non-person following the Pravda article Muddle instead of Music. Prokofiev indicated his cooperation: he was determined to become a Soviet composer. In the Cantata for the 20th Anniversary of the October Revolution he played out his genuine enthusiasm for mass scorings, combining colossal symphonic forces with a double choir, a brass band, an accordion ensemble and a gigantic percussion section. The cantata oscillates between revolutionary vehemence and lyrical melodies, bet- ween Russian folklore and riotous military tumult.

members of the Erfurt Air Force Band. Also called into action are a nine-piece percussion section, an accordion quartet, gun shots, alarm sirens etc. whilst the conductor himself uses a megaphone to give a rousing rendition of the texts.

The results are undeniably exciting if less than seismic, the recorded sound wonderfully clear without threatening to overwhelm domestic speakers.

The results are undeniably exciting if less than seismic, the recorded sound wonderfully clear without threatening to overwhelm domestic speakers…A modicum of applause is retained and may even want to join in.

Karabits frees Prokofiev’s October Revolution Cantata from any possible revolutionary pathos, enhancing the satirical and destructive character of the music, which Prokofiev didn’t dare to publish. The large ensemble united for this performance delivers a taut and focused sound, superbly caught by the microphones.