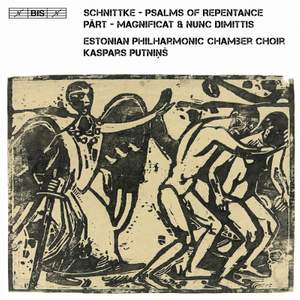 The performance by the Estonian Philharmonic Chamber Choir under Kaspars Putiniņš is really impressive with a particularly rich and sonorous bass sound that is absolutely tailor- made for this... — BBC Music Magazine, November 2018, 5 out of 5 stars More…

No. 1, Adam Sat Weeping at the Gates of Paradise

No. 2, O Wilderness, Gather Me to Your Silent and Gentle Lap

No. 6, When They Beheld the Ship That Suddenly Came

No. 8, If You Wish to Overcome Unending Sorrow

No. 9, I Have Reflected on My Life as a Monk

No. 10, Christian People, Gather Together!

No. 11, I Entered This Life of Tears a Naked Infant

Alfred Schnittke and Arvo Pärt lived through times of remarkable change in the last decades of the Soviet Union. From the 1970s, state restrictions on religion were gradually relaxed and this was reflected in the arts and especially in music. Schnittke’s adoption of Christianity was triggered by the death of his mother in 1972, and culminated in his later conversion to Catholicism. Pärt was from a nominally Lutheran background in Estonia, but embraced the Orthodox faith in the 1970s, following intensive study of liturgical music. Both composers began to incorporate religious themes into their work, moving away from the modernist abstraction that had characterized their early careers. Schnittke’s large-scale Psalms of Repentance were composed in 1988 for the celebrations for the millennium of Christianity in Russia. The texts come from an anonymous collection of poems for Lent, written in the 16th century, and in his settings Schnittke engages with the traditions of chant-based Orthodox liturgical music. The Estonian Philharmonic Chamber Choir and Kaspars Putninš have chosen to combine Schnittke’s Psalms with two shorter works by Arvo Pärt, whose music they are well-known exponents of. Like the Psalms, Pärt’s pieces are composed in a quasi-liturgical style, and with its serene atmosphere, his Nunc dimittis forms a natural counterpart to the Magnificat even though the two were written more than a decade apart.

The performance by the Estonian Philharmonic Chamber Choir under Kaspars Putiniņš is really impressive with a particularly rich and sonorous bass sound that is absolutely tailor- made for this music. The warmly resonant acoustic of St Nicholas Church in Tallinn provides a spellbinding aural backcloth to both this and the more contemplative Arvo Pӓrt settings.

At first blush, Schnittke and Pärt make for improbable bedfellows, but these magnificent performances bring out an often overlooked spiritual depth in the one and a sinewy toughness of conception in the other. It’s rare that a single performance prompts a wholesale reconsideration of a composer’s entire oeuvre, but Schnittke scholars will listen to this one very carefully indeed.

The Estonians have always rejoiced in a warm, rich sound and perfect blend, and guided by the utterly precise and dynamic Kaspars Putninš they give here a truly outstanding rendition that picks up every emotional and spiritual nuance with no sacrifice of technical perfection...This work has been waiting for choirs able to do this, because the technical challenges are not the most important thing about this music.