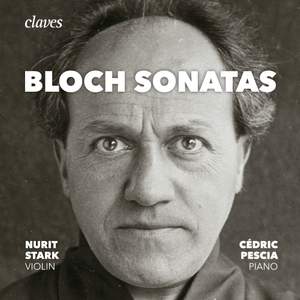 Nurit Stark’s sound is raw and agitated in the violin sonatas, but strangely effective, while Pescia’s Piano Sonata is pure in tone with superb voicing. — BBC Music Magazine, March 2018, 4 out of 5 stars

Nigh on 60 years after his death, the Swiss composer, born in 1880 of Jewish origin, naturalized American in 1924, remains relatively little known by the general public and music lovers alike. Yet his music, full of lyricism, drama, virtuosity, poetry, has all it takes to please. A couple in life as well as on stage, Nurit Stark and Cédric Pescia are literally captivated by Bloch’s music and personality. Between them, they combine the composer’s origin and nationality in a programme that unites the two Violin and Piano Sonatas and the Piano Sonata. According to Bloch, the programme of both Violin and Piano Sonatas, composed in 1920 and 1924 respectively, is as simple as can be: the first shows the world “as it is, with the violent opposition of primordial and blind forces” and the second depicts it “as it should be, according to our dreams”. Indeed, as the recording had just been completed, Cédric Pescia chose words he is not accustomed to using to describe it: “This CD is pure dynamite!”

Nurit Stark’s sound is raw and agitated in the violin sonatas, but strangely effective, while Pescia’s Piano Sonata is pure in tone with superb voicing.