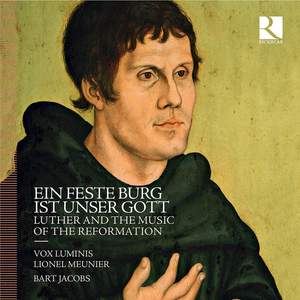 Luther and the Music of the Reformation

Lionel Meunier’s assured direction never misses (nor overstates) an expressive trick; and Vox Luminis’s warmly inflected singing is throughout finely-attuned to the way in which every note has... — BBC Music Magazine, July 2017, 5 out of 5 stars More…

A two-CD re-issue devoted to the Lutheran liturgical repertory from Martin Luther himself to Heinrich Schütz.

The first disc comprises compositions specific to the Lutheran liturgy: Deutsche Messe, Deutsches Magnificat, Deutsche Passion (the first German polyphonic Passion, by Joachim von Burck) and even a reconstruction of a Deutsches Requiem drawn from polyphonic works that set the same texts as those Brahms was later to use for his Deutsches Requiem.

Lionel Meunier’s assured direction never misses (nor overstates) an expressive trick; and Vox Luminis’s warmly inflected singing is throughout finely-attuned to the way in which every note has its exact place in sustaining the whole. A superb anthology, superbly executed

This year has seen several fine recordings celebrating the quincentenary of the founding act of the Reformation but this is comfortably the most searching and artistically rewarding that I’ve listened to.....The music is of consistently high quality, the selections by ‘minor’ figures frequently as telling as those by acknowledged masters...Programmatic flair is backed up by performances and a sound recording to match.

In short, this is a winner all round, and deserves to be taken up by historians and music lovers alike.