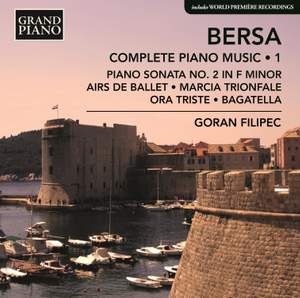 Bersa: Na žalu (At the strand)

Blagoje Bersa was a major figure in Croatian musical life, his compositions a compound of Mediterranean, Central European and Balkan elements. His piano music, of which this recording is Volume 1, reveals a rich diversity drawn from Classical and Romantic models, encompassing charming Chopinesque barcarolles, a melancholic Notturno, a stirring Liszt-inspired Fantaisie-Impromptu, beautiful balletic miniatures and the Brahmsian grandeur of the powerfully conceived Sonata in F minor. Goran Filipec, recent laureate of the Grand Prix du Disque of the Ferenc Liszt Society of Budapest for his album "Paganini Studies" (Naxos Records, 2016), is a musician who never fail to capture the hearts of music audiences and critics. Equally known for his interpretations of standard piano repertoire as for discoveries of forgotten musical gems, this sovereign pianist of fiery energy and profiled artistic personality cultivates a particular leaning towards the classical and romantic repertoire and works of pronounced virtuosity.

It’s colourful, unabashedly virtuoso and quite substantial...This pianist commands a transcendental technique and possesses an unflappable sonority that refuses to splinter, notwithstanding Bersa’s thickest onslaughts...I cannot recommend this release highly enough and, needless to say, I look forward to Vol 2.