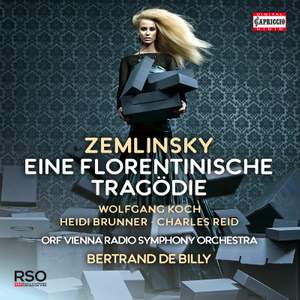 The vitality of Bertrand de Billy’s conducting and the richness of the Vienna Radio Symphony Orchestra’s playing in this 2010 concert recording are both extremely compelling. Wolfgang Koch provides... — Gramophone Magazine, June 2018 More…

Oscar Wilde’s A Florentine Tragedy was written in 1893, but remained a fragment when the author was arrested. But the material was in the air, so to speak, and Alexander von Zemlinsky, who may have had Richard Strauss’ recourse to Wilde’s Salome in mind and hoped for a similar success with A Florentine Tragedy, finally converted the play into a one-act opera. Puccini had also been interested in the material, but the publisher Tito Ricordi advised him against it. Other potential takers also included Ferruccio Busoni who also found the ending too hackneyed. However, such alleged triviality did not deter his colleague Alexander von Zemlinsky, who celebrated success with his opera. Alban Berg admired the work so much that musical parallels to the Florentine Tragedy can be found in his Wozzeck, premiered eight years later.

The vitality of Bertrand de Billy’s conducting and the richness of the Vienna Radio Symphony Orchestra’s playing in this 2010 concert recording are both extremely compelling. Wolfgang Koch provides a committed and well-rounded portrayal of Simone…This is a distinguished addition to the discography of this rewording late-Romantic opera.

Koch is an intelligent musician and a pleasure to hear. Heidi Brunner turns her somewhat blousy mezzo-soprano to excellent account, lending Bianca blood-lusty force rather than beauty of tone, while the tenor Charles Reid makes a properly ardent, youthful and callow Guido. Capriccio has been a keen advocate for Zemlinsky, and sonically this is one of its best CDs, the forward placing of the singers ensuring verbal clarity at only the occasional expense of instrumental detail.

The hugely accomplished but lurid music is akin to the most excessive and obvious Straussian effects written larger and even purpler. Bertrand de Billy conducts this live performance (Vienna, 2010) with unabashed passion and brio. ...anyone interested in Strauss’s oft-overshadowed contemporaries will find this worth investigating and the recording makes a strong case for the piece in all its gory glory.