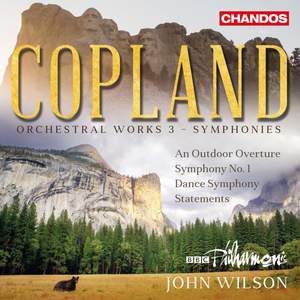 Wilson and the BBC Philharmonic make the most of this music’s European footprints, aided by the typically clean and expansive Chandos recording, with beefy climaxes and plenty of ballast from... — BBC Music Magazine, March 2018, 4 out of 5 stars More…

I. Dance of the Adolescent

II. Dance of the Young Girl

The exploration by John Wilson of Copland’s major orchestral output with the BBC Philharmonic has now reached Volume 3, with this invigorating programme recorded in surround-sound. It opens with An Outdoor Overture, a cheerful and breezy piece which Copland composed in 1938, intending to spearhead an initiative encouraging ‘American Music for American Youth’. Originally written for organ and orchestra, the First Symphony is presented here in its revised version (1926-28) for large orchestra. The six concise movements of Statements (1932-35) introduce a new style, their gritty soundscapes being stunning examples of what Copland later would refer to as ‘hard-bitten’ pieces. The concluding work is the expressive, fantastical Dance Symphony (1929) which explores different styles of symphonic movements, its dark aura a residue of its origin as a ballet on a grotesque vampire theme, composed 1922-25 and named Grohg. The symphony has remained a highly controversial piece ever since.

Wilson and the BBC Philharmonic make the most of this music’s European footprints, aided by the typically clean and expansive Chandos recording, with beefy climaxes and plenty of ballast from the lower registers. But they’re equally effective punching out the American jazz rhythms…All told, this ebulliently performed collection offers a fascinating portrait of a greatly skilled composer in transition. Don’t hesitate for a moment.

Wilson’s approach is markedly different [from Copland’s own recordings], yet eloquent in its own right. Take ‘Militant’, the opening movement of Statements. Copland’s performance is strident and sharp-edged; Wilson’s is rounded and polished…In ‘Cryptic’, the second movement, Wilson finds a reflective, elegiac tone rather than the pained grieving Copland evokes. In fact, it’s in quiet, lyrical passages that Wilson is at his most compelling.

Wilson’s life-long immersion in the sound-world of American music of the 30s and 40s continues to pay huge dividends in the third instalment of Chandos’s splendid Copland series – if Vol. 1 boasted the Greatest Hits, Vol. 3 makes an equally vivid case for four comparative rarities, with the more acerbic movements of Statements making a particularly strong impact.

Wilson relishes the eerie orchestral effects of the central Dance of the Young Girl, but also revels in the Stravinskyan rhythmic audacity of the faster sections. He is an ideal champion for this latterly neglected music, especially the six aphoristic Statements (1932-35) and the cheery Outdoor Overture.

The Outdoor Overture, originally for a youth orchestra, is unremittingly, brightly optimistic, showcasing Chandos’ superb recording. The symphony is an arrangement of the Symphony for Organ and Orchestra. Stravinsky’s influence is clearest in the second movement; this performance’s strength is the finale, which flows like lava.