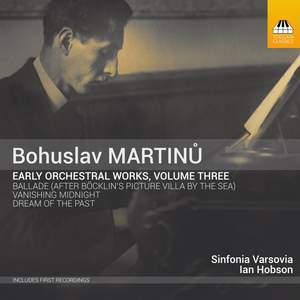 Vanishing Midnight, H. 131: I. Satyrs in the Wood of Cypress

This series of first-ever recordings of Martinů’s early orchestral works has already uncoveredmuch delightful music; this third release moves everything up a gear.

Vanishing Midnight is as exquisitely lovely as it is powerful and dramatic – Martinů’s first truemasterpiece, but it is also his last full-on engagement with Impressionism

The two shorter works here – Ballade: Villa by the Sea and Dream of the Past – are colourful andatmospheric tone-poems, pieces of real substance and major discoveries in their own right.