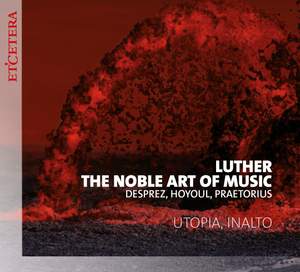 Luther, The Noble Art of Music: Works by Desprez, Hoyoul, Praetorius and others

In a letter of 4 October 1530 to the chapel-master of the Bavarian court Ludwig Senfl (c. 1488/89–1543), Martin Luther famously proclaimed that, “I plainly judge and do not hesitate to affirm that except for theology, there is no art that could be put on the same level with music”. The position stands in stark contrast to some of his reformer contemporaries, who, disturbed by music’s power to affect the soul, all but banned it from the Church. Luther, on the other hand, sought precisely to capitalize on the qualities that music possessed in order to advance his reforms. For him, music was a powerful tool for private meditation and diversion, for strengthening communal ties, for spreading his message, and for public representation. Luther’s high evaluation of music was based in personal experience. As a schoolboy in Eisenach, he sang regularly, and at university he received training in speculative music theory as one of the seven liberal arts. He played the lute, and could compose. As a well-educated musician, he continually stressed the importance of music not only as a part of worship, but also as an essential part of general education. He once famously remarked that every schoolmaster must be able to sing, and he emphasized the importance of music education in his 1524 guidelines for the founding of schools (An die Ratsherren aller Städte deutschen Landes, daß sie christliche Schulen aufrichten und halten sollen). Accordingly, music played a central role in the school curriculum, and witnessed an enormous growth in Lutheran areas during the reformation. Luther himself planned a treatise on music, but this was never completed. The most emblematic musical manifestation of Luther’s reforms is undoubtedly the repertory of songs in the vernacular whose creation Luther initiated: the chorale, or hymn, repertory. With their German, poetic, and strophic texts, set to simple and memorable melodies, these chorales allowed the faithful to sing communally together as well as to express and share religious and spiritual ideas. They were employed privately, publicly, and for educational purposes.