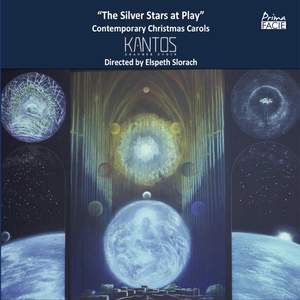 Frances-Hoad: This Time Is Born A Child

Cusworth: Of A Rose Synge We

Morgan, H: Make We Joy Now in This Fest

Turner, John: Away in a Manger

Frederick Frahmm: Unto Us a Son Is Given

Steele, D: The Child Of God

Hand, C: He Left The Silver Stars At Play

’The Silver Stars at Play’ is a collection of world premiere recordings of contemporary Christmas carols sung by Kantos Chamber Choir, directed by Elspeth Slorach.

The carols on the album are by composers such as John McCabe, Sir Peter Maxwell Davies, Sadie Harrison, Cheryl Frances-Hoad, Douglas Steele and Colin Hand amongst others.

Several of the carols have illustrious connections: Child of the Manger (2011) by Sir Peter Maxwell Davies was composed for the Choir of the Chapel Royal and was dedicated to Her Majesty the Queen and His Royal Highness, The Duke of Edinburgh. John McCabe’s Peace Carol (2006) was first sung by the Choir of St John’s College, Cambridge under the direction of Andrew Nethsingha in May 2014, a performance which was among the last of any of his works at which he was present.

The all-embracing message of Christmas is present in each and every carol, but perhaps the lyrics of the Peace Carol are especially poignant when we consider that this recording was made in Manchester, in May this year, close to the time of the terror attack at Manchester arena.