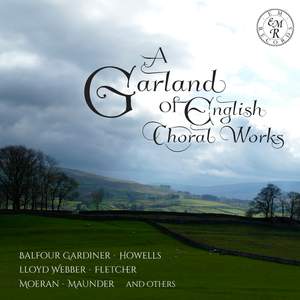 A Garland of English Choral Works

These performances, recorded between 1979 and 2016, reflect the conductor’s love of English choral music, and cover a period of choral writing in which composers were greatly influenced by pastoral... — Choir & Organ, July 2018, 3 out of 5 stars More…

Moeran: Songs of Springtime: Under the Greenwood Tree

Horovitz: It was a lover and his lass

Stanford: Shall we go dance

Warlock: All the Flowers of the Spring

Fletcher, P: O Man remember (from The Passion of Christ)

Maunder, J: The Saviour King goes forth to die (from Olivet to Calvary)

EM Records is delighted to present the Nicolai Chamber Choir, a choral group associated with Stockholm Cathedral. A Garland of English Choral Works ranges from early delights by Thomas Morley and Pearsall, through Herbert Howells’s intense and moving Requiem, to Balfour Gardiner’s beautiful Evening Hymn. Of particular note are the choruses from Olivet to Calvary by John Henry Maunder – a work that too long has lain overlooked and neglected, yet is now experiencing a resurgence of interest, especially in Scandinavian countries, and two part-songs by William Lloyd Webber, of which these are the world première recordings.

These performances, recorded between 1979 and 2016, reflect the conductor’s love of English choral music, and cover a period of choral writing in which composers were greatly influenced by pastoral scenes of the English countryside. The thematic thread running through the programme is Shakespeare, the Tudor period and a sprinkling of Victoriana. All the expected names are represented and of particular interest are six movements from Howells’s Requiem (the precursor of the magnificent Hymnus Paradisi), the forward-looking harmony of Peter Warlock, and ‘O Man remember’ from Percy Fletcher’s The Passion of Christ – an unusual reminder of this composer. This competent choir sing very well in English and are a credit to Ljunggren.