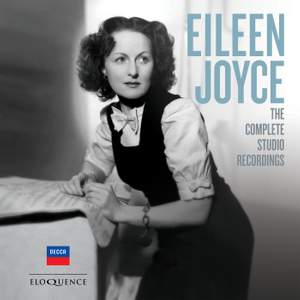 Pianophiles will be slavering at the prospect of having access to all this great artist’s recordings...for me it is the Arensky Trio that shows Joyce at her brilliant best...she finds a perfect... — Gramophone Magazine, February 2018 More…

Paradies: Sonata in A major No. 6

No.2 In E Flat Major

No.4 In A Flat Major

No.2 In E Flat Major

No. 1, Andante sostenuto in B Major

Organ Prelude and Fugue in A Minor

2. Intermezzo in A Major

No.8 in A Flat Major

Mozart: Romance in A Flat Major K A205 attribution

No. 9 Andantino in E Major

No.10 Andante in C Sharp Minor

No.5 Humoresque in G Major

Malcolm: Variations on a theme by Mozart for four harpsichords

No. 4 The Maiden and the Nightingale

‘In every way the most transcendentally gifted young piano student I have heard in the last 25 years’ was Percy Grainger’s pronouncement of the young EILEEN JOYCE (1908–1991) when he first heard her play in 1926. From the goldfields in Western Australia, whose capital city is the most remote in the world, Joyce defied incongruous and humble beginnings to forge a career that took her to the international pinnacle of twentieth-century pianism. Now, for the first time, her complete studio recordings, made between 1933 and 1959, are issued collectively as a 10CD box with a lavishly illustrated and annotated booklet.

The Tasmanian-born pianist Eileen Joyce was still a student of the legendary pedagogue Tobias Matthay at the Royal Academy of Music in London when she made her first recording, at her own expense, in June 1933. This was of Liszt’s concert study ‘La leggierezza’, and the Parlophone Company was sufficiently impressed by the recording to purchase it from her and request a side B. So began a 27-year-long recording career, stretching almost to her retirement in 1960. The many short pieces she recorded for Parlophone, documented on CDs 1-4 of this box, were not salon trifles but compact classics of piano literature, by Bach, Mozart, Chopin, Schumann, Liszt and Rachmaninov, among others. They are distinguished by a precision and clarity of articulation which became known as the hallmark of her playing, as well as the flamboyance, strength and stamina that gave her so durable a career in concert.

More substantial works from those early years include piano trios by Arensky and then Haydn, recorded for Columbia once EMI had absorbed the Parlophone label. In 1942 she made her first complete concerto recordings, of the fine concerto by John Ireland and the First Concerto by the youthful Shostakovich. After the war she became a Decca artist, and continued to record a remarkably wide range of repertoire, from classics and rarely heard miniatures to contemporary music. In fact her first recording for the label was never issued: Tchaikovsky’s Second Concerto, rarely encountered then as now. Shelved for mysterious ‘technical reasons’ it has been specially remastered for this set and shows Joyce at her best: a fearless performance, ‘one of the finest I have heard,’ according to the pianist Philip Fowke, ‘a performance of sparkle, passion and bravura’.

The set’s editorial content includes a personal memoir of the pianist from Bryce Morrison; a thoroughly researched and documented history of her early years by David Tunley; an account of her career by another Australian academic and historian of performing arts, Victoria Rogers; and the story of her career as a recording artist, by Cyrus Meher-Homji. For any pianophile, piano historian, or simply lover of superbly crafted piano playing, this box promises a treasure-trove of exciting discoveries.

‘She played Mozart with real devotion. Even I could recognize that, though I couldn’t figure out whence it came. It’s funny, too, because I heard her very old recording […] of KV 576 just a few weeks ago on the radio, for the first time in perhaps twenty years, and it made me think again what an extraordinary pianist she really was.’ Glenn Gould on Eileen Joyce (in conversation with Bruno Monsaingeon)

‘Those of you on the look-out for a good piano recording … should most certainly get the Parlophone E11237 on which Eileen Joyce plays two Etudes, one by Liszt and the other by Schlözer … Never before have we heard such clarity and detail and absence of piano “twang” on a record … The result is certainly one of outstanding merit.’ Gramophone, October 1933 (Joyce’s first recording)

‘extraordinary technical dexterity … a fine musical intelligence, subtle feeling for nuance… An inspired Press agent might christen her “The Feminine Horowitz” or “Menuhin of the Piano”.’ The Broadcaster, September 1936

‘Listening to Eileen Joyce in the D major Sonata (No. 17) we learn how much subtler the Mozart rubato is than the Chopin. Miss Joyce is one of the few pianists who have its secret, and that is one of the reasons why her playing of this sonata feels so full of life beneath its calm exterior.’ Musical Times, September 1941 (Mozart Sonata KV 576)

‘Her Mendelssohn is the most outstanding performance here. She certainly tears into the first movement con fuoco, as marked, but equally striking is the crystalline delicacy she brings to other passages, and thee finale is a joy.’ Gramophone, July 1998 (Mendelssohn Piano Concerto No. 1)

Pianophiles will be slavering at the prospect of having access to all this great artist’s recordings...for me it is the Arensky Trio that shows Joyce at her brilliant best...she finds a perfect balance of stunning virtuosity, nimble wit and, in the lovely third movement, a deeply affecting lyrical repose that gives the lie to those who say that Joyce’s playing was all surface glitter. I’d buy the set for this performance alone.

Above all and beyond the often phenomenal brilliance of the playing, Eileen Joyce performances are life affirming and original. Small wonder that her playing had even the greatest pianists by the ears. Lavishly presented and outstandingly re-mastered, this set should be in every musician’s collection, a startling reminder of a pianist whose early career was touched by genius and charisma. Sheer talent does not come bigger than this.