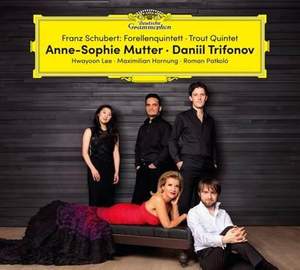 Two stars from different generations, artists of the highest calibre, mark their first collaboration with an album devoted to one of the supreme landmarks of classical music.

Anne-Sophie Mutter, who in 2016 celebrated the 40th anniversary of her professional debut, and Daniil Trifonov, now in his mid-twenties, joined forces with three outstanding young string playing alumni of the Mutter Foundation at the Baden-Baden Festspielhaus in June to perform Schubert’s Piano Quintet in A major, popularly known as the “Trout” Quintet.

They also explored the composer’s Notturno, a sublime late work for violin, cello and piano, and arrangements of his songs Ständchen and Ave Maria for violin and piano.